An Electric Bike Fleet Can Make Your Organization & the World A Better Place!

Select a day on the calendar below, then complete the form following. Once we have reviewed and approved your request, we'll send you an email confirmation.

Can't make it to one of our locations? No problem. We'll come to you! Just let us know where we can meet you in the description box below. We're looking forward to riding with you!

Please complete the form below to schedule your service appointment.

Need pickup and/or delivery? No problem. We'll come to you! Just let us know where we can meet you in the description box below. We're looking forward to getting you back on the road soon!

Innovative companies such as Google have already joined this revolution by providing electric bike fleets for their staff and employees. Whether to navigate large campuses, go to meetings or lunch, or make deliveries, it can all be healthier and cheaper with an ebike! Employee and client bicycle incentive programs are profitable and exciting.

According to the Centers for Disease Control and Prevention, over $9 billion dollars in workplace productivity are lost every single year in the U.S. due to conditions like heart disease, cancer and diabetes – all of which are preventable with increased physical exercise and improved diet.

333 million tons of Carbon Dioxide are released into the atmosphere by cars each year. By commuting on a bike one day each week, we could decrease air pollution in the U.S. by more than 10 Million tons each year! The zero emission electric bike commute mitigates pollution, makes the commuter happier, and the world better.

Set a Greener Example with a Fleet of Electric Bikes For the first time in several million years, and for the first time since the appearance of humans, the level of CO2 in our atmosphere has reached an average of 400 parts per million. This grim landmark is an urgent call for action. Municipalities can reduce emissions significantly and set a good example at the same time by not using fossil fuel burning cars for short trips and errands. An electric bike can get over 2,000 MPGe, and most in-city trips are less than 10 miles and involve carrying little cargo. Stop burning fossil fuels and start burning calories and fat instead! A simple change can help mitigate pollution, the ugly ‘brown cloud,’ and city heat island effects and also make city employees more fit, more happy, and more functional! 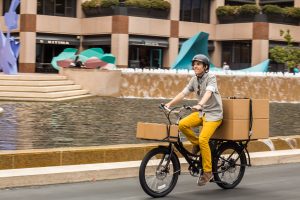 Save Time and Money with Electric Bike Deliveries On-time and economical deliveries make both your customers and bottom line happy. Providing zero emission “green” delivery to your customers can add some extra sizzle to your brand and your image, and save you money at the same time. Vehicle registration fees, insurance payments, and fuel purchases can be reduced drastically with the simple use of an electric bike fleet for local deliveries. Burning fat and calories instead of fuel will make your delivery team happier, healthier, and more efficient. Put a spark in your deliveries with a fleet of electric bikes! 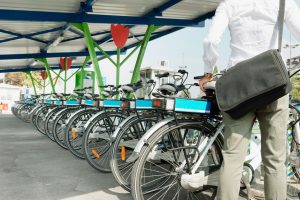 Improve Your Bottom Line and the Health of Your Workforce Join innovative companies like Google by providing electric bikes to your employees and visiting clients. The availability of a bike fleet can significantly benefit corporate sustainability as well as employee incentive and well-being initiatives. Encouraging employees to commute to work, navigate corporate campuses, make small deliveries and travel to lunch by bike instead of by car is healthy, functional, and fun. According to the Centers for Disease Control and Prevention, over $9 billion dollars in workplace productivity are lost every single year in the U.S. due to illnesses which are mostly preventable with daily exercise and better nutrition. Burning calories and fat instead of fossil fuels can make a big difference in the lives of your employees and your bottom line.

Small Planet eBikes is all about minimizing the carbon footprint on this planet by getting more people on bikes...eBikes to be specific. Not only are eBikes a clean, efficient and sustainable mode of transportation, they are also really fun to ride! Some people say that eBikes eliminate the fitness aspect of riding a bike – We say, those people have never tried an eBike. Come test ride an eBike at one of our locations and prove it to yourself.